Summary: Twitter on the go from your Windows phone 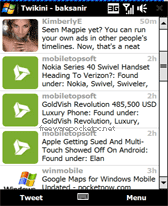 The developer made it paid app

Twikini offers a powerful and efficient way to use Twitter on your phone. It conveniently updates your favorite feeds in the background, and leverages the camera, GPS, media, touch screen, keyboard, graphics and storage capabilities of your device.

Twikini is currently in public beta - you're welcome to download and use it for free.

Our goal is to make Twikini the best designed Twitter app for Windows devices in the world.

* FAST! Unlike other Twitter apps for Windows Mobile, Twikini is written entirely in native C++ code for maximum performance and the fastest load time possible.
* Simple, uncluttered, and customizable user interface. Choose from a variety of themes for the best reading experience. (
* Post tweets using a full screen editor. Optionally, set your location (either manually or using GPS) along with your status updates.
* Twitpic integration to post photos with your status updates. Select existing photos or click new ones from your device's camera.
* Read status updates just like browsing a web page. Quickly reply, retweet, favorite, or email other people's tweets.
* Windows Media Player integration. Automatically tweet the song and artist you're listening to.
* Single download that is compatible with all Windows Mobile devices - both touch and non-touch. 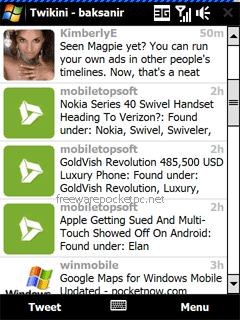 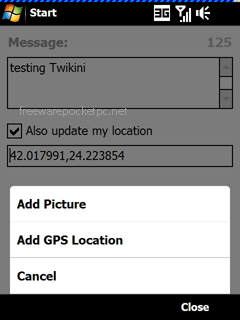 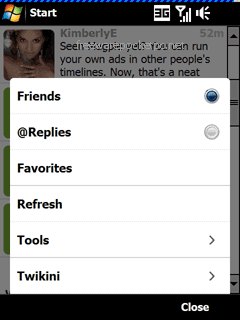 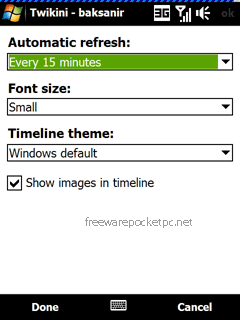 * New: Full send and receive support for Direct Messages. View your Inbox and Sent items, read, write and delete DM's.
* New: You can now forward a tweet by SMS (just like you could with email). Look under Menu when reading a tweet.
* New: You can now display any user on a Google Map (it's pretty cool). To try it, click "Show on Map" in the Menu when viewing a user's profile.
* New: TwitPic images are now displayed inline right within the tweet window.
So you don't have to open a browser. Just open any tweet with a TwitPic link and you'll see.
* Improved: Better image caching. Images will load much faster and use less bandwidth.
* Improved: The "Go to User" dialog defaults to the screen name from the highlighted tweet.
* Bug Fix: "Tweet Song Info" will now turn off when you sign out of one account and sign into another (this ensures that you don't accidently tweet your music taste to the wrong Twitter account!).
* Bug Fix: If you look at a protected user's profile that you are following, it gives you the option to Follow (instead of Unfollow).
* Bug Fix: The Twikini icon will be created under Start > Programs instead of the Start menu.
* Bug Fix: https:// URLs were not being handled correctly when reading tweets. * Miscellaneous tweaks and improvements.

Remaining known issues (these will be fixed in the final v1.0 release):

* GPS does not initialize on some devices. A workaround is to use a different app like Live Search or Google Maps, initialize the GPS and then use it in Twikini.
* Auto Refresh does not work when device is turned off. The device has to be plugged in to a charger or remain ON for Twikini to auto refresh.
* Tweets in Russian, Chinese, Thai, Dutch and most other non-English languages do not post correctly.

* New: You can now shorten URLs with your choice of service, including Bit.ly, TinyURL and Digg. Look for the "Shorten URL" menu item when updating your status.
* New: You can now view any user's full size picture (you don't even need to be their friend). Look for the "Large Picture" menu item in any user's profile.
* New: You can now send Direct Messages (however you cannot read DMs yet. Next version, I promise!).
* Bug fix: After updating status, you would sometimes only see one tweet.
* Bug fix: Before setting a location that is too long, you will be warned and allowed to edit it. Previously this would result in an error message.
* Bug fix: Fixed date/time parsing issues due to which people in non-English locales could not view timelines.
* Bug fix: The tweet sound was not being played any more after auto refresh.
* Miscellaneous tweaks and improvements.

* New: You can now view any user's timeline (regardless of whether you're following them).
* New: You can now delete your own tweets from within Twikini.
* New: GPS coordinates can be optionally geocoded (e.g. "47.680042,-122.177742" can be converted into "Seattle, WA" automatically).
* Pressing the "OK" button in the Tweet dialog won't post the tweet. This helps prevent accidental posts.
* Much better connectivity. Twikini will safely re-establish your Internet connection when necessary (in case it was dropped by the carrier or you switched between WiFi and GPRS).
* Fixed a bug due to which you may see duplicate tweets every time you refresh Favorites.
* Slightly less flickering when redrawing timelines
* More performance tweaks and memory optimization.

PockeTwit
PockeTwit is a twitter client for the Windows Mobile Profess...