Summary: Easy to use task manager for Windows mobile phones 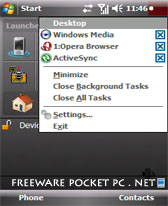 
tMan is a tiny task manager with easy-to-switch and easy-to-close features. It supports closing and minimizing of applications. The main reason why tMan made is that there is no task manager which is HiDPI aware and respects taskbar theme. It should be a small application for closing and switching tasks. It should not replace whole taskbar functionality (like Wisbar and others do) and it should not have the switching feature in notification area (like Switch is done). Features of tMan include: Update Description: