v1.00
Summary: It generates mazes and allows you to steer a little blue dot using the movement sensors in the HTC Diamond. 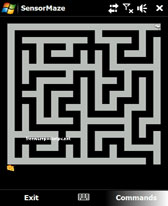 
I wrote this little program, called SensorMaze. It generates mazes and allows you to steer a little blue dot using the movement sensors in the HTC Diamond. It is based on the original SensorTest program and since it has been a while since I programmed for any PDA, it is a bit simple.

Try to send the blue dot to the red dot by tilting your Diamond in the required directions.

- New Maze: create a new maze in the same level
- Next Level: increase the complexity.

As mentioned, it is my first attempt, so there is still some work that needs to be done.

- Implement timer, so you can compete against yourself
- remove the "Position" text and replace with timer output
- MessageBox instead of Dialog ?
- Replace the blue dot with a "ball" like structure
- Release the source code (after cleaning it a bit more)