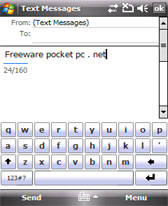 
It offers a visible feedback of the key currently pressed, you can imagine that your finger is on the keyboard... and now you can easily see what key is pressed. You can move your finger, the key will change, release it, the key will be triggered (so it's the opposite of a physical keyboard: the actual action is when you release the key, not when you push it). For VGA Support, please download a VGA skin, for instance here. Unzip the file of this zip archive in the PocketCM Keyboard directory (\program files\pcmkeyboard\ for most of us).

Why another keyboard for Windows Mobile? Because:
- It can be used with fingers.
- It suggest word based on letter position.
- It trigger the key when your remove your finger from the screen, not when you press it.
- It can be customized.
- It's a standard Windows Mobile SIP, so to use it you have to select it as the input method, therefore it can be used in (almost) any application.

Uninstall the keyboard manually:
Since v0.4 it shouldn't be useful to do it manually, however, here is the procedure if it doesn't work as expected.
After removing the cab, there may still be an entry in the keyboard list. To get rid of it, using your favorite registry editor.
Remove the key (and subkey):
HKEY_CLASSES_ROOT\CLSID\{BB25F2EB-688C-4698-ADFC-F422A148AD4F}

v0.14 (28-03-2008):
- Autocomplete feature (will propose to complete a word if no other suggestion can be made).
- 2 gesture support: space and backspace (slide left to right, or right to left).
- Internal change in the data structure, should be a lot faster and consume a less memory.
- Bug fixes: option dialog, layout association dropped after selecting a skin, ...
- Updated some layout and dictionary.
- Thanks to all the people that have donated for PocketCM software, and due to the lack of free time, I've decided to remove the time limitation in PocketCM Keyboard, you can now use it for free (personal use), without any restriction in feature or timing. Of course, donations are still appreciated!

v0.10 RC2 (25-10-2007):
This is another bug fixes release, the objective is to get a stable version before starting adding big new feature. However, some nice stuff are there.
- Performance improvement while typing SMS and mail.
- Better landscape support: the key are larger.
- Better handling of switching from landscape to portrait.
- Update layout.
>> German Layout (thanks Krille).
>> Polish Layout (thanks Mr Groch).
>> Portuguese (thanks kalavera).
- Bug fixes.

v0.6:
- It is a bug fixes release:
>> Fixed crash when tapping on some part of the keyboard.
>> Feedback disappeared after moving out of the kb.
>> Memory leak with suggestion.
>> Suggestion with letter from symbol pad were buggy.
>> Keyboard disappeared after moving out from symbol pad without selecting a letter.
>> Symbol pad was only available on special characters.
>> Some timer weren't killed properly, possible battery drain.
- Multiple symbol pad can be defined on any key. v0.5:
- Build-in copy/cut/paste (press enter key for 250ms).
- Automatic back space repeat.
- Double tap on shift key to lock.
- Customizable symbol pad (available on any key trough settings).
- Customizable image on every key (through settings).
- More key available for layout: tab, esc, home, end, etc...
- Feedback window now is always centered.
- Bug fixes (row number, etc...) and optimization. v0.4:
- Option dialog (deactivate autocompletion, choose layout and skin).
- New skin: "Dream".
- Speed optimization.
- Better support for more row: now the number of row is determined by the layout, you can even have different number of row for each layout.
- Better localization support.
- Suggestion box positioning improvment.
- Bug fixes.
- Clean uninstall: uninstalling the keyboard should cleanly remove the keyboard from the list. v0.3b:
- Fixed issue with skinning (not able to load images) and enable Windows Mobile suggestion in messaging app.

v0.2:
- Suggestion box is placed near the caret.
- Suggestion box color (can be customized).
>> Green: I'm gonna replace your text with that.
>> Blue: your word seems correct, tap here for alternative.
>> Red: I don't know your word or any near word, is it a new one?
- Suggestion can be undone: after fixing your text, a button with your previous text appear, tap on it to go back.
- Shift key (can't be locked yet, it's coming).
- Tap and hold symbol key for 500ms and quick symbol will appear, choose your symbol and release (perfect to quickly tap a ? or ! without switching keyboards).
- Performance improvment.
- Bug fixes.
- Better default english dictionary (and smaller).
- Support for VGA devices.


Our network,
Interesting places to explore