Summary: Magnets is a game originally proposed in the French magazine "La Recherche", at the end of 2003. The developer has automated the game on the Pocket PC, with a random generator to get more grids to find. There's also some visual help to show rule violations, which are often hard to see on paper.

Found under: games, board, puzzle, strategy 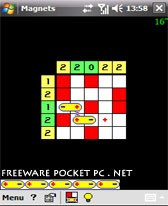 
Magnets is a game originally proposed in the french magazine "La Recherche", end of 2003. I automated the game on Pocket PC, with a random generator to get more grids to find. I also added some visual help to show rule violations, which is finally funnier because it's hard to see on a paper. Game is freeware, enjoy! Rules:
- Each magnets uses two white blocks.
- Two positive poles never touch themselves, as well as negative poles.
- No 2x2 block square is fully occupied.
- The number of positive poles is indicated on the edge of rows and columns. Install:
- Just one file to manually copy on your Pocket PC from the zip. Update Description: