Summary: MagicSudoku is designed to be an easy to use sudoku solving software. 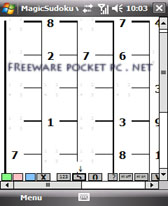 
MagicSudoku is designed to be an easy to use sudoku solving software. Many people will say that a sudoku is meant to be solved using only a pen and a piece of paper and that using a software is some kind of cheating, but I believe that using a software that only does what you would do anyway by hand using your pen and paper isnt cheating at all, so I designed MagicSudoku with this goal in mind.

MagicSudoku for PocketPC requires Windows Mobile 5+ and a VGA display (640x480 pixels). This doesnt mean that it wont work on an older OS or a smaller screen, but it has been developped and tested for this configuration, so if you use it on any other configuration, it may not work as good.

MagicSudoku is developped using the Microsoft .Net Compact framework 2.0 and requires the framework runtime to be installed on your Pocket PC in order to work. I personnaly only own a Dell Axim x51v Pocket PC, so this is the platform on which I test and use MagicSudoku and I never had the chance to test it myself on any other device, but since it's based on the .Net Compact framework, it will work well on any device that can run the framework.