v2.78
Summary: Turn your life around - literally, with the help of changeScreen, a screen rotation application for G-Sensor enabled Windows Mobile phones. 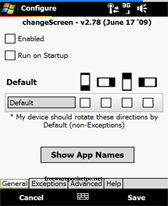 Gyrator is a great app... with a load of functions but I found that I didn't really use any of them except the screen tilt/Gsensor function. That said one of the problems I had with Gyrator is that it always stayed in my open apps which is not THAT big a deal, but would just annoy the crap out of my OCD brain! Anyway I decided to make a different version for myself and anyone else who JUST wants the Screen tilt function. Turn your life around - literally, with the help of changeScreen, a screen rotation application for G-Sensor enabled Windows Mobile phones.

- Allow you to stop and start the screen switch as you please.
- Start up with your device if desired.
- Allow exceptions (Opera is an exception by default because it already uses the Gsensor).
- NOT show up in the running programs list! (Most important thing to me!)
- You also do NOT need to install .NETCF 3.5 to use this. It should run fine on 2.0! 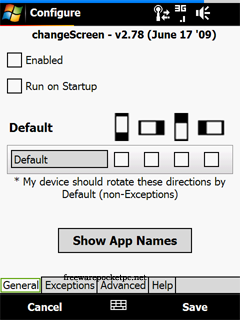